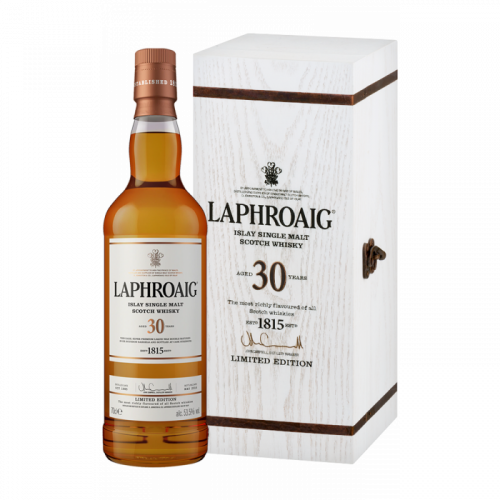 In 2015, to celebrate its 200th anniversary, Laphroaig launched a 32 Year Old exclusive ? the highest aged whisky it had released in over 8 years. In 2016, Laphroaig 30 Year Old was launched and in 2017 the 27 Year Old Double Matured Laphroaig continues this series. The entire range is presented in white wooden boxes with hand carved images of the distillery inside.

To make this exquisite liquid, mature Laphroaig previously aged in refill hogsheads was transferred into first-fill ex-bourbon barrels and refill quarter casks. Patiently aged in Laphroaig?s famous Warehouse No. 1, these casks were then hand selected for a final maturation. This rare whisky features a touch of Laphroaig?s trademark peat smoke tempered by lime and sea salt. Each and every sip will be well worth the wait.