Liber Pater wine and the rush for rare grapes in Bordeaux

Jane Anson visits the estate behind the ‘most expensive wine in Bordeaux’ and reports on plans at several estates to resurrect old and rare grape varieties.

The articles started coming thick and fast from early July onwards. Liber Pater had officially become the most expensive modern Bordeaux wine, with its 2015 vintage on sale at €30,000 a bottle.

And as ever with stories around Liber Pater, I was torn somewhere between admiring owner Loïc Pasquet for his chutzpah/audacity/confidence, and banging my head against a wall.

I read several pieces that said this was the highest altitude vineyard in Bordeaux and the wine was purely made from pre-Phylloxera ancient grape varieties no longer used in the Bordeaux vineyard. Neither statements are true.

And above all that, there were articles suggesting that 2015 Liber Pater offers the true taste of Bordeaux in 1855. Oh, come on…

I finally made it back down to the vineyard towards the end of August. My aim, as ever when I meet up with Pasquet, was to try to cut through the hype and see what was actually going on. I left feeling for the first time that I was getting closer to understanding the reality of project.

‘It is simply not the case that the wine is made up of grapes that are no longer found in Bordeaux.’

What is true is that from 2015, Liber Pater comes from 100% ungrafted vines, which in itself is pretty remarkable, and that it uses farming methods rarely seen in the region. I have walked through the vineyard several times over the past few years, and it is looking healthy and happily wild right now.

Its certified organic vines are left in permaculture as much as possible, and all grow on individual stakes, with no training wires between them.

This makes the 20,000 vines-per-hectare density – equal to a distance between rows of 60cm and between each vine of 80cm – easier to understand because it means you can walk, and work, between them fairly easily.

But, they are not the only ones in Bordeaux to do this. Jean-Philippe Janoueix, for instance, is among the producers to have vines at the same density.

One of the first producers in Bordeaux to popularise training vines along wires was Marcel Richier, the agronomist owner of Château d’Agassac in the mid 19th century. He arrived in 1841, and it was called the Agassac Method for a while.

This means that Pasquet can also fairly claim that he is recreating the traditional method used to cultivate vines; a technique practised not just in 18th century Bordeaux, but by the ancient Greeks and Romans.

But that’s not to say you should buy wholesale into the hype.

Yes, Pasquet is planting rare varieties, and should be congratulated for it in my opinion, but it is simply not the case that the wine is made up of grapes that are no longer found in Bordeaux.

The blend of the 2015 vintage that is being offered – all 200 bottles of it – for such large sums of money is almost entirely Cabernet Sauvignon.

But he refers to it under its old name Petite-Vidure, just as Lafleur refers to its massal-selected Cabernet Franc as Bouchet, to underline its difference from modern clones.

At Liber Pater, this is put together with small amounts of Petit Verdot and Malbec, and around 2% of the rare varieties – mainly Castets, Tarney and St-Macaire.

The 2018 vintage, which I tasted from amphorae, will have a little more of the rare varieties, but will still be dominated by ungrafted Cabernet Sauvignon, Petit Verdot and Malbec.

That’s not to criticise, but just for clarity.

And it’s a hugely impressive wine. The Cabernet from different parts of the vineyard is being aged separately, with everything in amphorae, jalles and earthenware vats, a development since the early years that is thoroughly sensible, so you can track the taste without oak interference.

Tasting them ‘blind’ revealed them to be in the Cabernet family, but not like the more classic Cabernet of today. They had a delicacy and a vibrancy to them that was genuinely exciting, and it’s a shame that the price puts them out of reach of, well, pretty much everyone.

Rare grapes on the rise in Bordeaux

But do a little digging and you can see Liber Pater as a signpost towards a host of other projects happening right now in Bordeaux that give an insight into the 19th century vineyard and its wines – without the price tag.

Estates planting rare grape varieties include Clos Puy Arnaud in Castillon, which has Mancin and Castets from massal selection that will make up 2% of the vineyard in the next few years.

I’m also looking forward to trying the 100% Castets and 100% Mancin bottlings that Liber Pater has planned under the name Liberi Bellaria in the years to come.

You can also find pre-Phylloxera Merlot and Cabernet Sauvignon grapes up at Clos Manou in the Médoc, in their stunning cuvée 1850 that is one of the best wines I have tasted all year. It’s priced at less than €30 from the estate.

Then there is Haut-Bailly with its four-hectare plot of 1890s grapes that goes into the first wine every year. It is a collection of rare genetic material of Cabernet Franc, Carmenère, Merlot, Malbec, Petit Verdot and Cabernet Sauvignon, all mixed up together in the rows as they would have been in the 19th century. Some American rootstock has been added to protect against phylloxera.

Over in St-Emilion, Trottevielle has more than 3,000 ungrafted Cabernet Franc vines from the 1890s that have been bottled as a separate cuvée since 2004.

Château de la Vieille Chapelle is one of the most advanced in its rare grape project.

Right back in 2009 they used DNA analysis to identify the Bouchalès grape from a small plot of pre-Phylloxera vines.

In 2014 they carried out a full study of the 400 vines in the same plot, all non-grafted, 19th century vines, and discovered 11 forgotten varieties including one unidentified hybrid.

Since 2016 this has expanded into a project of massal selection that has involved replanting with a focus on five varieties over two hectares. Those varieties are Bouchalès, Mancin, Cot (Malbec), Castets and Carménère, with the first plants in this year and the debut harvest expected in 2021.

But you can already try examples, such as the estate’s ‘C’est Bon Le Vin’ bottling, which is 65% Bouchalès, 25% Merlot and 10% other rare Bordeaux grapes. This wine was made in 2006, 2008 and 2010, when the winemaking team believed the ungrafted vines to be Merlot and Petit Verdot.

There is also a more recent cuvée, called Bouchalès-Merlot to reflect the blend, made every year since 2014.

This is vinified in cement vats and then aged in 400-litre, neutral barrels to ensure no oak impact, and made with no added sulpur. And the price for all that? So far, €60 from the Château.

‘We’re interested in exploring whether these old grape varieties might be useful in the 21st century fight against climate change,’ Fabienne Mallier of La Vieille Chapelle told me.

‘We already know that intensive production is damaging soils and vines, and it’s worth questioning whether grafting is adding to the increase in vine disease.’

Last but not least on this list, there is Château Cazebonne in Graves, not far from Liber Pater, which has been owned since 2016 by Jean-Baptiste Duquesne. He works with respected biodynamic winemaker David Poutays.

They have plans here to add up to 25 forgotten varieties, including Mancin, Pardotte, Castets, Sauvignonasse, Penouille and Bouchalès, to release under the name ‘Cépage d’Antan’. The first plantings began in 2018.

These are surely sensible questions, surely worth looking at before planting ‘new’ varieties that have never been seen in Bordeaux but are currently in discussion for Bordeaux and Bordeaux Supérieur.

It’s heartening to see that the spirit of innovation in Bordeaux is alive and well.

And if Loïc Pasquet and Liber Pater has convinced even one or two winemakers that there is a future in this, I say congratulations.
Read more at https://www.decanter.com/wine-news/opinion/news-blogs-anson/liber-pater-wine-bordeaux-grapes-423894/#jkpTXdgbZH0HiMsM.99 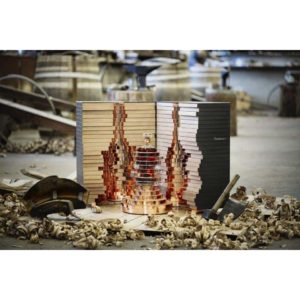 Hennessy 8 Encompasses the Brand’s History in One Spectacular Bottle

In a typical company, the passing of the reins from one generation to the next is cause for a retirement party, a